Join the forum, it's quick and easy
Bunn3h's Ark Servers

» I shouldnt render stuff at 30000 frames ever again

History is fascinating, at least I think so. Therefore I would like to share at least some of the most interesting pieces of history with you. I will try to post here at least once a week. However for now as it is quite late and I dont have anything prepared, as such I shall relate shortly the story of the destruction of the Kingdom of Lydia. A bit of background first, the Kingdom of Lydia was a nation that existed from 1200 BC to 546 BC. Lydia was by all accounts extremely wealthy, indeed, their last king, Croesus, Paid for the construction of The Temple of Artemis (one of the seven ancient wonders of the world). Croesus was so wealthy in fact that is where the modern saying "Rich as Creosote" has its origin. During the reign of Croesus the Persian empire grew rapidly in size and power, and during the 13th year of his reign Croesus decided to consult an Oracle on the subject of making war upon the Persians. The people of that ancient day and age put great faith in portents, omens, and especially Oracles, and many times the course of history has been altered by their advice, sound or not.
When Croesus consulted the oracle at Delphi (one of the most renowned oracles of all time) he received this "Prophecy". The oracle told him that if he went to war with Persia a great empire would be destroyed. Croesus was delighted, as he assumed this meant he would defeat the Persians, and he promptly declared war. This proved to be a mistake, within a matter of months the capital of Lydia, Sardis, was seized, captured, and sacked by the Persians. The legendary wealth of Croesus was carted of to the Persian capital Persepolis, and the king himself was relegated to the position of adviser to Cyrus. Thus the prophecy of the oracle was proved true, and that is the tale of Croesus and the fall of Lydia.

I had quite a difficult time deciding on what to post about for this week (thus the lateness of the post), but I finally struck upon the perfect thing. The man who invented the Odometer, the first programmable device, and the first vending machine, Heron (or Hero) of Alexandria. 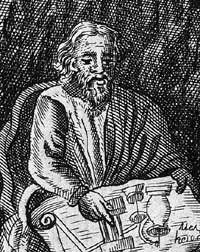 Heron was born sometime around 10 AD (there is some debate about it, but this is the most widely accepted year) in Alexandria (who would have guessed?). I have simply not been able to discover much about Heron's early life, so I shall tell of some of his accomplishments. Heron's genius was a wide ranging genius, throughout his life he invented and designed so many things that it would be impossible to list them all here. However some of them stand out such as his vending machine, this device was created for a temple to dispense holy water. Those who came to the temple would insert a coin into the device causing a set amount of holy water to flow into the basin. This was not the only device Heron invented for temples, before one could encounter the vending machine they first had to enter the temple. This was done through special doors Heron designed to open as if by magic. When the temple was opened each day a priest would light a brazier, perhaps throwing some sacred herbs or saying a prayer to whichever god the temple belonged. After a brief time the doors would swing open with no apparent cause, to the people of the time this was an apparent act of a god. The process through which the door was opened was thus

The fire in the brazier heated the water in the chamber causing pressure to rise. This increase in pressure forced water out of the chamber and into the bucket. This increase in weight caused the bucket to descend, and, through a series of pulleys and counterweights, open the door. Heron accomplished many fascinating things through the use of pneumatics, many of these inventions are recorded in his book Pneumatica (which you can find online herehttps://www.loc.gov/item/07041532/ its quite interesting). Devices such as water powered organ (the musical kind), bronze singing birds, and much more.

Of all Herons inventions one of them stands out as his greatest "What if?", this invention is the steam aeolipile. 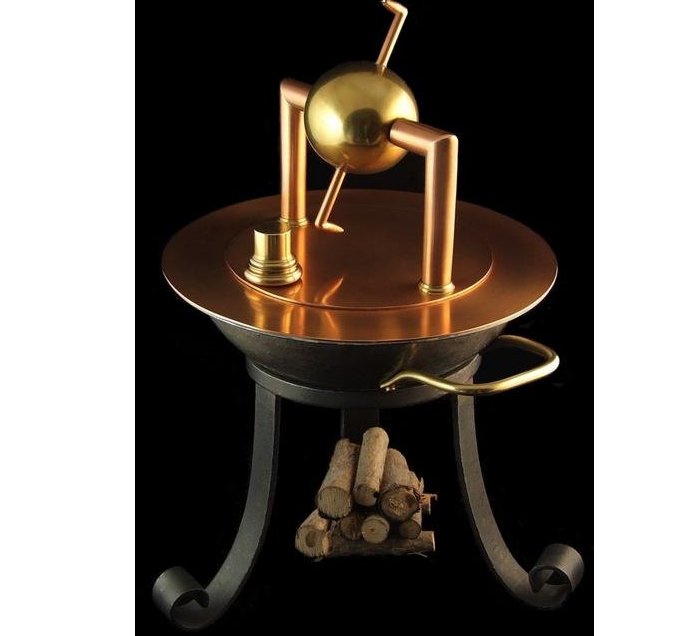 The device consisted of a small sphere with nozzles at both ends, this sphere was connected to a basin of water by two thin pipes (one on either side). Under this basin a fire was lit, heating the water and sending steam into the sphere. This steam would build up until it was forced out of the nozzles causing the sphere to spin rapidly, essentially creating a primitive steam engine. Had Heron thought to combine this with the piston, invented roughly two centuries earlier he could have launched an industrial revolution in the first century. However Heron saw it as nothing more than a toy, a bauble, and took the idea no further, leaving the tantalizing thought of a steam powered Roman Empire a mere fantasy.

Heron accomplished many amazing things during his life and I have barely scratched the surface. His contributions to mathematics and mechanics are extraordinary, and yet he has almost been forgotten. I hope that at least some of you will read this and discover the Genius of Heron of Alexandria.

This is the Saga of Olaf Trygvesson, King of Norway. (part 1)

The years just prior and after 1000 AD were a period of great turmoil in Europe. In the span of 30 years almost all of Europe was converted to Christianity, willingly or otherwise. There were many larger than life figures in these troubled times but one of my favorites was Olaf Trygvesson, King of Norway. Olaf was born in 963 AD and was immediately thrust into turmoil. At the time of his birth his father, Harald Fairhair, had just been murdered and his mother had gone into hiding on a small island. When he was about 3 years old Olaf and his mother were forced to flee first to Sweden, only to have to flee again pursued by spies of the reigning queen, Gunnhild, the wicked widow of Eric Bloodaxe. First they fled south to the Orkney islands then east towards Russia. While in Estonia Olaf and his mother were captured by vikings and sold into slavery (at this point Olaf's mother is lost to history). Olaf was first sold for a good ram, then a cloth cloak, and it was with his second master that Olaf would be forced to work for the next six years. It was apparently pure luck that a cousin, who was a tax collector for the Russian King Valdamir I, saw the boy in a marketplace and seeing a resemblance inquired. Upon learning the boy's identity the relative bought him and took young Olaf to Vladamir's court. Olaf quickly gained stature, becoming a favorite of the Russian queen. Olaf's rise was meteoric and at the mere age of twelve, King Vladamir put him in command of 12 ships and sent him to battle. Olaf quickly proved an extremely capable leader, Loved by his soldiers for his generous pay, and his superior athleticism. As Olaf won battle after battle his standing in the Russian court grew, alarmingly so to some. The King's council did not like that a foreigner had such great power and they whispered things to that effect in Vladamir's ear. Olaf soon became aware of the insidious mutterings in the court and asked permission to leave Russia and return to his homeland. With a heavy heart Vladamir granted his request. From Russia Olaf went to Poland, fell in love with the princess, Geira, and married her. There Olaf remained for 3 years and was by all accounts extremely happy. However it did not last, when Olaf was 21 Geira died, hearbroken, he took a fleet of 90 ships and set sail.